Ghior.com →🏠 → Story → Story on What Is Play to One May Cause Death to Another 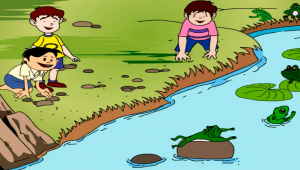 There was a pond full of frogs. Some of them often put their heads’ out of the water and croaked loudly. One day some boys were playing by the side of the pond. When they heard the frogs croaking, they began to throw stones at them. All the frogs at once went down into the water. But the boys remained standing there with stones in their hands. The new game was great fun to them. They went on pelting the frogs with stones when they raised their head above the water. Thus, many frogs were if it hard and a few were killed. At last, an old frog raised its head and said, “Oh boys please! please! stop the cruel fun. Don’t throw stones at us.” “It is a play. We are enjoying it,” said the boys. “What is a play to you causes death to us. This is why, you should stop it,” answered the frog. Being ashamed they left the cruel game and went away.

Story on Honesty of a Rickshaw Puller

Abdur Rahman is a rickshaw puller. He is very poor. Every day he has to work hard to maintain his family. One day, while he… Read More »Story on Honesty of a Rickshaw Puller

It was a summer day and a crow became very thirsty. It went here and there in search of water but in vain. At last,… Read More »Story on Where There Is A Will, There Is A Way

Story on Obedience to Mother

Once there was a small boy named Bayazid Bastami. His mother was ill. One night he was studying by the side of the bed of… Read More »Story on Obedience to Mother

Story on A Spider Inspires a King

Robert Bruce, king of Scotland, fought several battles to regain his country’s freedom but was each time defeated. Naturally, he was a very sad mood… Read More »Story on A Spider Inspires a King

Story on The Courage and Bravery

The Bravery of Some Boys One day some boys were playing cricket in a school ground. All of a sudden, they heard a hue and… Read More »Story on The Courage and Bravery

Story on Generosity and Good Example

The generosity of a Friend Mr. Ahmed has just completed his graduation. He has not got any job yet. Some of his friends serve in… Read More »Story on Generosity and Good Example

Story on The Cats and the Monkey

Once there lived two cats in a house. One day the cats stole a piece of cake. They had a quarrel over the sharing of… Read More »Story on The Cats and the Monkey

Story on A Grocer and A Fruit Seller / Tit for Tat

One day, a grocer borrowed a balance and weights from a fruit seller. After a few days, the fruit seller asked the grocer to return… Read More »Story on A Grocer and A Fruit Seller / Tit for Tat

Story on Ready Wit of a Cook

A cook once roasted a duck for his master. The roast looked very delicious. The cook ate up one of the drumsticks. When his master… Read More »Story on Ready Wit of a Cook