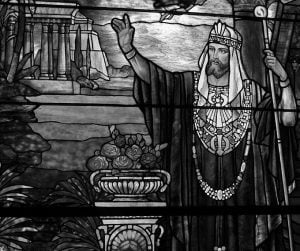 King Solomon was renowned for his wisdom. He was a man of great intelligence. His name and fame spread all over the world. The Queen of Sheba also heard about him. So, she wanted to test his wisdom. The queen went to Solomon’s court. She took with her two garlands one of the real roses and the other artificial roses. But both of the garlands looked quite alike. The queen placed them on the table and said, “Oh wise king, please look at the garlands. Tell me, which one is of real roses.”?

Solomon thought for some time. It was very difficult for anybody to identify the real rose. Just then he saw some bees humming outside the window. King Solomon told his men to open the window. Then the bees came in and sat on the garland of real flowers. The king then pointed to that garland. The Queen of Sheba was greatly charmed at his wisdom. She said, “May God grant you a long life. You are really ‘Solomon the Wise’.”

Once there was a king whose fame spread far and wide. His name was Solomon. He was very famous for his ready wit and wisdom. The Queen of Sheba came to know about him. She wanted to test the knowledge and wisdom of Solomon. Therefore, she came to the palace of the king. She brought two garlands of roses with her. She asked the king to tell which one was natural between the two garlands. King Solomon thought for some time and opened the windows. The bees came in and sat on the natural one. Then the king pointed to the natural garland. The Queen of Sheba was fascinated by the ready wit of the king. She admitted that Solomon was really a wise king.