Story on Grapes Are Sour 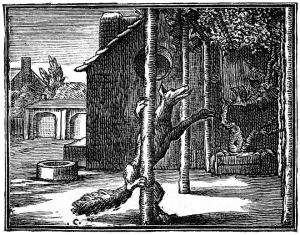 There was a forest near a river Once a hungry fox was searching for food in the forest. After a while, he came to a vineyard. He was tempted by the fine bunches of ripe grapes. He said, “I must get some of these grapes. They must be very sweet.” He jumped up to reach the grapes. But the grapes were hanging high up. He tried again and again but failed. At last, he found that it was useless for him to try anymore. So, he went away and consoled himself saying that the grapes were sour and he did not want them as he could not satisfy his desire to taste the juicy grapes.

Once there was a hungry fox that was searching for food in the forest. The fox was walking through the forest. Suddenly, he came to a vineyard. There were ripe grapes in the vineyard. They were tempting. They were hanging high. The fox wanted to get them. So, he started jumping to reach the grapes. But the fox failed to reach them. The fox was sweating. He became very tired. So, he gave up the hope of having the grapes. He consoled himself by saying that the grapes were sour. The fox went away.

The Grapes are Sour

One day a fox was very hungry. It was looking for food. All of a sudden it came across a vineyard. It saw that ripe grapes were hanging from branches. They were quite high from the ground. The fox jumped over again and again but failed to reach there. Then he began to repeat. Gradually, he became more hungry and thirsty. He became weak and felt unhappy because after trying hard he failed to eat the grapes. The fox could not satisfy its desire to taste the delicious grapes. He gave up trying, and walked away with an air of dignity and tried to console him saying, “The grapes are sour and harmful for the health.” So, we should be content with what we have and what we can get easily.

Once a hungry fox was searching for food in the forest. After a while, he came to a vineyard. Ripe grapes were in the vines. The fox was very hungry and thirsty. He was tempted by the beautiful ripe grapes. The grapes were hanging high. The fox thought of having a good of the ripe grapes. So, he jumped and jumped to reach the grapes. But the grapes were high to reach. The fox became tired and thought that it was no good trying. So he went away saying” The grapes are sour. I don’t want to have the grapes”