Ghior.com 🏠 » Story » Story on Tricks of a Cunning Fox

Story on Tricks of a Cunning Fox 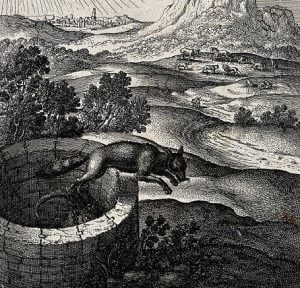 There was a fox. He was very bad. By chance, he fell into a well. He tried his best to get out of it but in vain. After a while, a goat came there to drink water. As the goat peeped in, he saw a fox into the well. The goat asked the fox what he was doing into the well. The fox was very cunning. He replied at once that he was drinking the sweet water of the well. The goat felt tempted as he was thirsty, but he was frightened as well. The fox could realize the hesitation of the goat. He cleverly told the goat to get down into the well and drink the sweet water of it together. The goat was quite a fool. He could not guess the motive of the clever fox and jumped into the well. As soon as he got down into the well, the clever fox jumped off the well putting his legs on the back of the goat. The fox thus freed himself from the danger. He thanked the foolish goat and went away. The goat tried his best to get out of the well. But he could not do so. He became sad for his foolishness.

Once in summer day, a fox was very thirsty. He looked about all day for water to drink. At last he came to a well. The well was very deep. He tried to get water. He tumbled in. There was a little water, So he was not drowned. He drank all he could. Then he tried to get out. But he could not. A goat came to the well to drink water. He saw the fox and said, “I could not get any water. Is there water to drink?” The cunning fox was glad to see the goat and at once made a plan. He invited the goat and said, “My friend, this well is famous for its sweet water. I have jumped in and I’m drinking water to my heart’s content. If you want a taste of it yourself, please jump into it.” Without a second thought, the foolish goat jumped in the well. The fox at once leaped on the goat’s back then on to his long horns and got out at the well. Before leaving the place, he looked into the well and said, Foolish goat, look before you leaf. The goat at last cried to come out and wanted to get help from the fox but the fox went away.